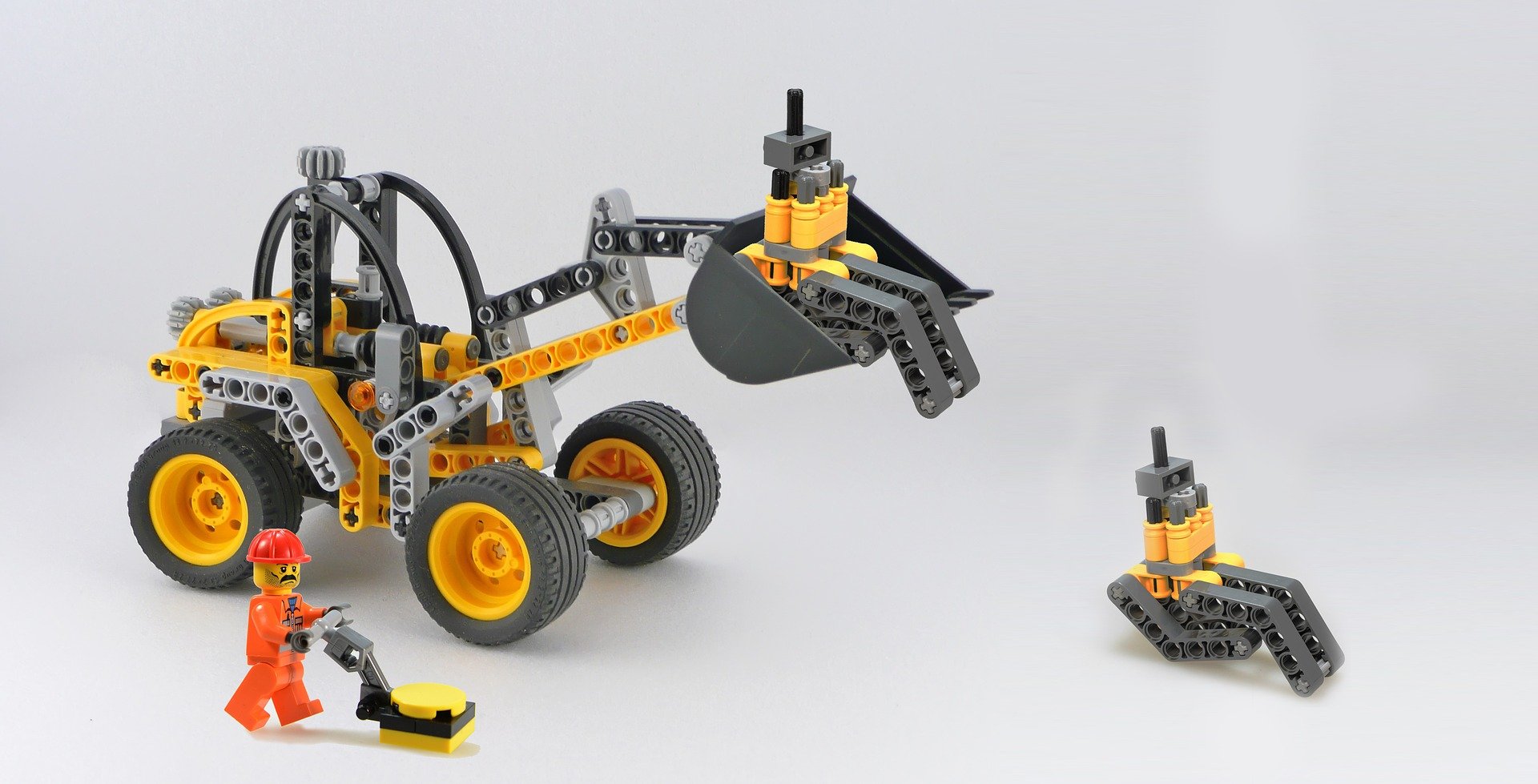 Why would anyone think of using LEGO for homeschool science and physics? On my website I introduce myself this way:

Note the second line: LEGO® Brick Enthusiast. I am serious about that, and have spent way more on LEGO building sets as an adult than anyone probably should…but I have fun, and there are worse vices, right?!

So a little history. Way back in the late 1970’s LEGO came out with a new series they called Expert Builder, which became the Technic™ brand of today. These sets have parts that allow construction of not just buildings or shapes, but working machines. Universal joints, gears of different sizes, motors, axles. I found these fascinating and fun to build, and I have continued to collect those building sets over the years. Last year’s “flagship” Technic® set is amazing: over 4,000 pieces, fully remotely controlled via a Bluetooth connection to an app on your smartphone or tablet.

When I decided to start my own company to share my love of food science, I knew that LEGO bricks are also great teaching tools. That’s how Beakers & Bricks, LLC was born (I couldn’t figure out how to get Star Wars® in there…but I’m wearing a Star Wars shirt as I write this)! Beakers & Bricks, LLC is essentially a publisher of homeschool science curriculum, and also science courses for interested adults.

How LEGO bricks can help with homeschool science and physics

A previous blog article talks about kinesthetic learners: those who learn best in hands-on, tactile, moving environments. LEGO parts and elements seem born for this. As young minds build their problem solving and manual dexterity skills improve. The instructions that come along with kits don’t have words describing how to build the set, just pictures. Builders develop a sharp eye as  they’re required to look at the pictures for small changes from one step to the next, and then reproduce those changes by finding and then applying the correct parts. Exactness is key here, teaching even further skills.

Of course, as any person with LEGO sets in the house attest, those sets don’t usually stay together. The real fun begins when the parts are in a pile, and creativity comes into play as imaginative models are built, torn apart, and new ones built in their place…a wonderful, never-ending creative explosion. I still have most of the parts from those original Expert Builder sets from the 1970’s and they still work! Just don’t step on them with bare feet. With all the sharp edges, it’s an experience in pain you won’t forget!

LEGO educational sets, the next step

I am certainly not the first to recognize that LEGO parts and pieces lend themselves nicely to teaching. However, as I did research for my physics and engineering book, I found that existing programs were very shallow. Most have very little explanation of the concepts demonstrated by the models. The result is students can build a cool model and see how things work, but don’t end up learning a lot about the concepts they’re seeing.

In my case, I knew I could use the Technic® brand (gears, universal joints, and such) to teach physics and engineering, and I don’t like shallow texts. My course Introduction to Physics & Engineering introduces physics concepts in great depth which are then reinforced by building and experimenting with custom designed models (I developed 16 for the course). The depth of the material results in a recommended age of 10 and up.

The LEGO Group (owners of all things LEGO) also has educational sets that were only available to schools, but recently have been made available to everyone. I have several of these sets, but most are “shallow”. Cool and fun to build sets, but not much in the way of concept explanation. Not all, though, some good options are here!

STEM (science, technology, engineering, and mathematics) groups have recognized the power of LEGO parts and pieces to kinesthetically cement concepts in developing minds. Groups meet in person and use these great tools to teach. In-person instruction followed by building is a great way to go when it’s feasible. The First LEGO League is one such group. Check it out and see if one meets near you. The older groups even build programmable robots and compete for prizes, all the way up to national levels.

As a parent trying to teach children, it’s hard to go wrong with LEGO bricks. However, if you have very young children, please be careful. The small parts are definitely choking hazards. Obtaining some parts and pieces to work with can also be expensive. A great option is to look at garage sales, and even on EBAY. Frequently find good deals on bulk used bricks as recently empty nesters try to pare down (usually, to their annoyance, without asking their kids). These bricks should be cleaned but that’s easily done, here’s one method. So get some, and happy building!

Get a free food science experiment when you sign up for our newsletter!

Something free to start your journey...

Sign up for our newsletter and get a free food science experiment!

You have Successfully Subscribed!